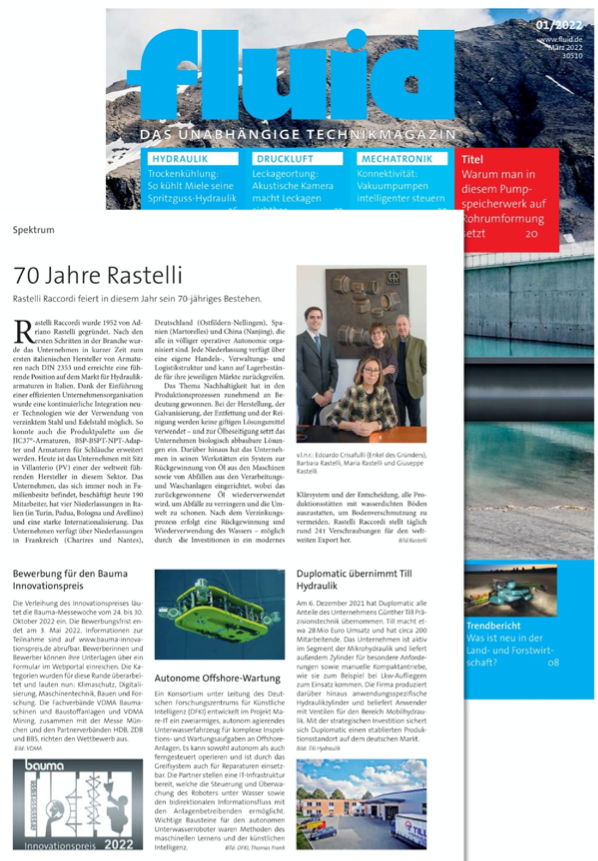 RASTELLI RACCORDI 1952-2022. We have reached our 70th year of activity and FLUID, the prestigious German magazine, presents us with a dedicated article

Rastelli Raccordi was founded in 1952 by Adriano Rastelli. After the first steps in the field, the company quickly became the first Italian manufacturer of fittings according to DIN 2353 and reached a leading position on the Italian market of hydraulic fittings.  Thanks to the introduction of an efficient company organization, a continuous integration of new technologies has been made possible, such as the use of galvanized steel and stainless steel. In this way, the product range could also be expanded with JIC37° fittings, BSP-BSPT-NPT adapters and hose fittings.  Currently the company, based in Villanterio (PV) is one of the world’s leading manufacturers in this sector. The company, still owned by the family, currently employs 190 employees, has four branches in Italy (in Turin, Padua, Bologna e Avellino) and strong internationalization. The company has branches in France (Chartres and Nantes), Germany (Ostfildern-Nellingen), Spain (Martorelles) and China (Nanjing), all organized in full operational autonomy. Each branch has its own commercial, administrative and logistic structure and can draw on warehouse stocks for their respective markets.

The issue of sustainability has acquired ever greater significance. No harmful solvents are used in the production, galvanizing, degreasing and washing – and, for the disposal of the oil, the company uses biodegradable solvents. In its workshops, the company has also equipped itself with systems for recovering oil from machines and waste from processing and washing plants. The recovered oil is reused in order to minimize waste and protect the environment. After the galvanizing process, water is recovered and reused, made possible thanks to investments in a purification system and the decision to equip all production sites with waterproof floors to avoid soil pollution. Rastelli Raccordi produces about 24 tons of fittings daily for export all over the world.

We use cookies on our website to give you the most relevant experience by remembering your preferences and repeat visits. By clicking “Accept All”, you consent to the use of ALL the cookies. However, you may visit "Cookie Settings" to provide a controlled consent.
Cookie SettingsAccept All
Manage consent

This website uses cookies to improve your experience while you navigate through the website. Out of these, the cookies that are categorized as necessary are stored on your browser as they are essential for the working of basic functionalities of the website. We also use third-party cookies that help us analyze and understand how you use this website. These cookies will be stored in your browser only with your consent. You also have the option to opt-out of these cookies. But opting out of some of these cookies may affect your browsing experience.
Necessary Always Enabled
Necessary cookies are absolutely essential for the website to function properly. These cookies ensure basic functionalities and security features of the website, anonymously.
Functional
Functional cookies help to perform certain functionalities like sharing the content of the website on social media platforms, collect feedbacks, and other third-party features.
Performance
Performance cookies are used to understand and analyze the key performance indexes of the website which helps in delivering a better user experience for the visitors.
Analytics
Analytical cookies are used to understand how visitors interact with the website. These cookies help provide information on metrics the number of visitors, bounce rate, traffic source, etc.
Advertisement
Advertisement cookies are used to provide visitors with relevant ads and marketing campaigns. These cookies track visitors across websites and collect information to provide customized ads.
Others
Other uncategorized cookies are those that are being analyzed and have not been classified into a category as yet.
SAVE & ACCEPT
Scroll